For those who have been following the news and events that we post on the Website and Facebook, you will have seen that we were among the sponsors for the Hoover Table fundraising efforts to send 30 students from public schools in Kraków to study in a Summer Program in the U.S.  In the original article, I mentioned that the U.S. Ambassador to Poland, Ms. Georgette Mosbacher, gave the keynote speech.  In her speech, Ms. Mosbacher, spoke about the original dinner that Herbert Hoover hosted, the other relief that he organized through various agencies and the circumstances that led him to be connected to Poland.  As much as I respect and admire the huge relief that President Hoover managed (feeding an estimated 1.5 million Poles in 1918 alone) it was the start of the story that most impacted me.

The story, published by the Stanford News, and recounted by the Ambassador is sometimes challenged, but I like it nonetheless.

“The story goes that in 1892, Herbert Hoover, a member of Stanford’s Pioneer Class, invited Polish composer Ignacy Jan Paderewski, one of the leading pianists in the world, to give a benefit concert. Due to problems with scheduling and publicity, only a few people attended. Hoover asked the pianist not to play, but he performed anyway, waiving his concert fee. And when Paderewski discovered that Hoover owed thousands of dollars for rental of the concert hall, the musician covered the bill. That incident marked the beginning of a friendship between the two men that would last 50 years.”

Hoover’s ongoing interest in Poland and support for its people are often attributed to this initial friendship.  Imagine what that implies if that is the case.  The relief and support that was brought to Poland, and which accounts for (literally) millions of Polish descendents alive today, can be traced back to a single act of generosity on the part of the Polish pianist Jan Paderewski.  Not having any way to know that Hoover would one day be responsible for the greatest acts of humanitarian aid the world had ever seen, or that much of this would be directed at his own homeland, he simply offered to help out a university kid who was in trouble.  It reminded me of the book “Pay it Forward” by Catherine Ryan Hyde.  (Good book.  Not so good a movie.)

In the book, Trevor McKinney, a twelve-year-old boy accepts the challenge that his teacher gives his class:

earn extra credit by coming up with a plan to change the world for the better, and put the plan into action

Trevor comes up with the idea that if he does something good for 3 people, and, rather than paying him back, they instead pay it forward to 3 other people, (and so on) then the good in the world will exponentially multiply.  I like the idea for both the mathematics and the idea of doing good without expectation of return. I like the idea that everyone can make the world a better place.  All we have to do is to help others out selflessly, and watch it multiply.  And I think that in his act of generosity, Jan Paderewski, who owed nothing to this kid from Stanford, payed it forward and was the catalyst for acts of kindness that he never could have dreamed of.  He did something within the scope of his power to help, and in the end had an impact that is immeasurable.

Imagine what it would mean if every day, each of us looked for excuses to do random acts of kindness.  And we should, because you might have a greater impact than you could ever hope for. 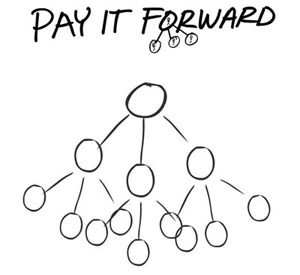